November 27, 2020 at 7:16 pm, No comments
In this creative writing exercise, I've included illustrations that took time to construct, as I am learning new things. The main reason I am forging ahead with new graphic techniques is to enrich my writing prompts by creating atmosphere.
This time I have included the text actually on this page as well as in a graphic format in the HTML file. Firstly, you can cut and paste the text to work on, and secondly, I want to make it easier to read. I have also provided a spoken version that informs the visually impaired what each illustration shows. 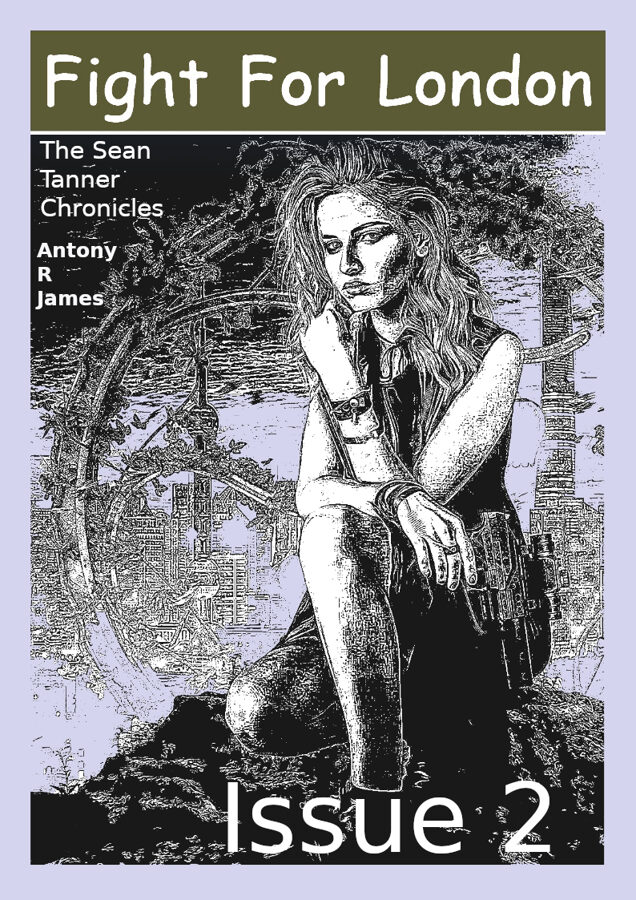 I have taken the story so far, leaving enough scope for you to continue. Don't forget the prompt text is copyright free, so if you want to branch off and create your own episodes using any of the characters and background information I've provided, then feel free to do so, that's the whole point of this website.

Going back to this episode, to carry on from where I've left it, you have months of fighting left before the dome is entered by Sean Tanner and Bridey Tyler. You need to think of a way to get in! Also, the Goblins have to be overpowered and freed from their masters. What technology will you find in the dome? How did the dome arrive? Was it an experiment gone wrong?

LISTEN TO THIS PROMPT: The Sean Tanner Chronicles-Issue 2

A young woman is crouched on a rock. She has long hair. She has a handgun in her hand. She looks like she’s thinking. Behind her is London; not the London we know, this is an alternative London which for us, can only be reached by passing through a space anomaly. The backdrop of London shows the city has been devastated, it is in ruin.

Sean Tanner is on the roof of a building inside the dome. The surrounding buildings are futuristic and strange. He is wearing combat gear with a helmet. On top of his helmet, infra-red goggles are flipped back. He is holding a gun and scanning the cityscape around him. Two helicopters are flying in the sky.

There is no text on this page.

Bridey Tyler is inside one of the buildings and walking down a corridor. There are scratch marks on the walls. She is dressed in a black shiny catsuit with a holstered gun, belt, combat boots and a military helmet with goggles on top. She has climbed up an exterior staircase to access the building and she is about to round a corner.

Sean Tanner and Bridey Tyler were finally inside the dome. It had taken days of intense fighting to overpower the Goblins. Their masters had been rounded up and were held in a detention block for questioning.

A Goblin stands in front of towering buildings. It is night-time and there is a full moon. The Goblin holds his arms outstretched and roars, bearing his teeth.

It all began when the Goblins started scouting raids into London. It seemed their dome was not enough for their masters. The Goblins spent weeks testing London's defences, and it wasn't long before they began launching attacks on key sites. It was obvious they were intent on taking the capital at any cost.

London was prepared to defend to the last, and people took up arms. For six months, a conflict took place between the Goblins and the occupants of London.

Sean Tanner and Volgier were summoned to an office hidden deep in the bowels of the base. No one had told Sean who was in charge of the base, and he hadn't got around to asking. He had assumed it was Sarah Serking's double. However, when Volgier opened the door after knocking, Sean was shocked to see Steve Minott. He gasped, and Minott noticed.

"I should be the one gasping, Tanner, old boy. You're meant to be dead!"

"Sorry, on my Earth…", Tanner tailed off.

"I heard the story going around the base. If I had not visited our Sean Tanner in the hospital before he died, I would not believe it. Oh, by the way, how is my double fairing? "

"That news has sent a shiver down my spine. When you have time, I'd like you to tell me about it. I need to know if there is anything I can do to prevent the same thing happening to me." said Minott.

Sean Tanner and Volgier are sitting on a couch in a spacious room. Steve Minott is standing in front of them. Tanner is sat cross-legged while Volgier is leaning forward with his hands clasped. Tanner & Volgier are dressed in military clothes, Minott is wearing a smart suit with a tie.

Minott explained to Sean and Volgier the worsening situation regarding the probing by the Goblins.

"I can see it coming down to a fight," he said.

"We aren't able to get into the dome, so we can't launch a pre-emptive strike," Volgier said.

Page 6. Text carried over from the previous page.

"Then we're going to have to let the fight come to us," said Tanner.

"I think you're right, old boy. You two should organise sentries around the dome perimeter. We can't have the public spooked by these raids."

It is night-time. A woman lies dead on the ground. She is wearing a Harem pantsuit, glasses and flat - ballet type shoes with a bow. She is in a lamp-lit park.

Sean Tanner and Volgier are walking in a wood at night. They are wearing military clothes.

Morning newspapers were full of the news about a series of brutal murders that happened across London the previous evening. Eyewitnesses told of a fast creature running on its hind legs away from each scene. London Zoo checked all of its dangerous animals but found they were all accounted for.

Tanner and Volgier were to join one of the sentries that night.

Suddenly, Sean and Volgier were attacked by a Goblin moving at lightning speed. Sean managed to defend himself but Volgier was left winded on the ground.

In the dark, a Goblin throws punches at Sean Tanner and Volgier. Tanner raises his arm to defend himself, but Volgier receives a blow and drops to his knees, winded. Goblins are approaching and are a blur of shapes with their bodies contorted at different angles.

In the distance, a group of Goblins were hurtling towards Sean and Volgier. They both ran towards the sentry guard…

It is still night-time, a helicopter hovers over the treetops. The whole scene is green as if you are looking through infra-red goggles.

Once Sean and Volgier reached the sentry post, the Goblins split up and disappeared into the surrounding wood. However, they hadn't left. They soon surrounded the position. Sean and Volgier briefed the guard about the situation and he decided to call for backup.

A Goblin is sitting on a bed inside a room in the base. He is only wearing trousers and boots, so his massive upper body is on show. He has pointed ears and his face is swollen from minor injuries sustained in combat.

Expertly trained soldiers were lowered from a troop helicopter into the wood to round up the Goblins, but they had underestimated their foe. The Goblins were lightning quick and tore into the soldiers. The backup troops were decimated. However, one Goblin was caught; the creature was found wandering in a daze and did not possess the capacity to fight. He was taken into custody and questioned at the base.

A repeat of the image of Goblins approaching, their bodies contorted at different angles. This time, they are in sharp focus.

A repeat of the image of a Goblin standing in front of towering buildings. It is night-time and there is a full moon. The Goblin holds his arms outstretched and roars, bearing his teeth.

Steve Minott, Tanner and Volgier questioned the Goblin and found him to be placid, despite his fearsome appearance. It seemed that during the fighting with the troops the Goblin had sustained a blow to his head that had altered his nature. The men found out he was named Buste-6X72 whilst talking with him, so they gave him the nickname Buster, which he liked and laughed loudly every time someone said it. Buster told them of the biological implant that all the Goblins have inside their heads. He concluded that his own must have been damaged during the fighting. He told the men of the plight of his race. They were genetically engineered for their strength and agility but required an additional implant to raise their levels of aggression. Once ordered to perform a duty a Goblin would not stop until his life was taken from him.

The Goblin is now dressed in a military uniform and walking proudly with a sunburst of white rays behind him.

Steve Minott gave a strict order that where possible, Goblins should be captured and not killed. The finest surgeons in London studied Buster's implant using all available imaging techniques. Once they had agreed on a strategy, the surgeons were poised to aid Minott in deactivating the biological implants buried in the heads of every Goblin. The Goblin race was considered to be acting under duress and with their implants in operation, not responsible for their actions.

Buster accepted the role as Goblin Advisor at the base and soon fitted in. A special uniform was made to accommodate his massive physique.

Red is dressed in a sleeveless pullover and black trousers. She is walking confidently towards Sean Tanner.

Sean Tanner watched Red walking up the corridor. If it wasn't for her blonde hair, he would have sworn it was his Rebecca walking towards him. She caught his glance.

"You do realise that there is probably another version of me here?"

Sean Tanner is dressed in a military t-shirt, combat trousers and boots. He has his arms folded awkwardly.

"Well, I'm from the domed London, so it stands to reason that I have a double in this London," said Red.

Sean hadn't considered the possibility. Although he knew it wouldn't be his Rebecca, his heart fluttered when Red told him.

A group of Goblins are running in an attack formation with damaged buildings in the background.

Months went by and the Goblins proved unstoppable. London became a wasteland and its people had no choice but to take up arms. A handful of Goblins had been detached from their masters and they fought alongside Volgier, Tanner and Minott's team. Red also helped with advice on the increasing attacks by fliers sent on bombing raids.

I have taken the story so far, leaving enough scope for you to continue. Don't forget the prompt text is copyright free, so if you want to branch off and create your own episodes using any of the characters and background information I've provided, then feel free to do so, that's the whole point of this website.

Going back to this episode, to carry on from where I've left it, you have months of fighting left before the dome is entered by Sean Tanner and Bridey Tyler. You need to think of a way to get in! Also, the Goblins have to be overpowered and freed from their masters. What technology will you find in the dome? How did the dome arrive? Was it an experiment gone wrong?