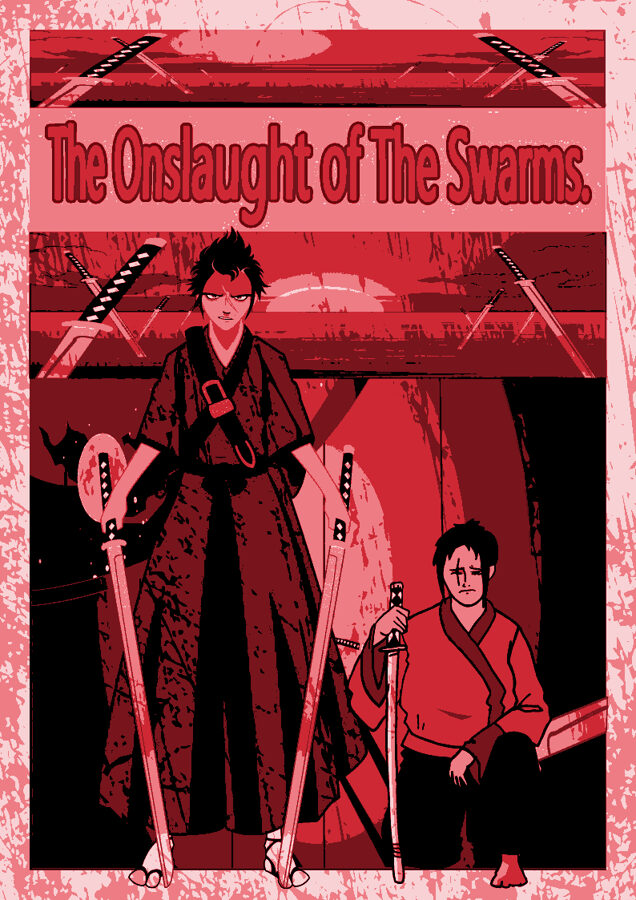 "ONE MAN’S FIGHT TO KEEP HIS ADOPTED SON SAFE DURING A TURBULENT TIME."

It started the day the government fell…
My name is Master Tenjin. Ling is my adopted son; his Mother and Father were murdered by kidnappers two years ago. I decided to move to London so I could provide a safer environment in which my traumatised ward could heal. For a while, we lived in peace. But, then The Swarms came.

I tried to teach Ling that the pen is mightier than the sword, that it is correct to turn the other cheek, but my fatherly instinct came to the fore when The Swarms unleashed an evil wave across London. I reluctantly went against my own teachings and became the thing I’d been warning Ling about. I did it to protect my son.

I was fishing with Ling along the banks of the Thames when I first noticed something was wrong. It was almost as if the birds knew it too. A silence descended like a blanket; not a cosy blanket in winter, but a stifling, suffocating blanket that almost takes your breath away. Ling picked up on my altered state and asked me what was wrong. I told him everything was fine, but deep down I realised it wasn’t.

I had my fishing knife with me and stuck it in my back pocket. I was ready, but not sure of the threat. I could feel it, creeping up, seeping from the ground; something wasn’t right.

Without warning, a body fell from the sky and landed at my feet. Ling screamed in shock. I tensed. I looked around and saw a well-built man on a balcony of a nearby tower block; he looked more than capable of throwing someone off of a building.

Minutes passed and then a din like nothing I’ve ever heard before filled the air. People were running in all directions away from crazed young men who looked intent on dishing out some serious violence. The young men were armed with everyday items, but that did not diminish the churning in my stomach.

Ling clung on tight to my leg, so I soothed him by stroking his head. I gathered only what I thought we might need and ran with Ling.

We soon saw an office block, so I burst in with Ling under my arm. A receptionist looked us up and down.

"Can I help you?" she said in an unfriendly tone.

"Can me and my son stay here a while? It isn’t safe outside.”

"It’s a lovely day outside. I wish I was able to get out and enjoy the sun. If you haven’t got an appoint…" she broke off, as bricks smashed through the windows and landed in front of her desk. "Good gracious me. What’s going on?"

"That’s what I’ve been trying to explain…"

Many emergency vehicles roared past outside with their sirens blaring.

The lady on reception sprang up and locked the door. “Come with me,” she said, rushing upstairs.

She opened a heavy oak door and startled the woman sitting at a large desk.

Grace, the receptionist, ushered me and my ward into the office.

"I haven’t got any appointments have I?" the woman asked.

"No. Didn’t you hear the windows smashing downstairs?" Grace said.

"I had my headphones on, I was going through the notes for the Stentford report."

"There’s some sort of riot going on. This gentleman can tell you more," Grace said, gesturing to me.

Before I had time to answer a crash from downstairs startled us all.

Grace gasped. "It sounds like the door’s been smashed open!"

I looked down the stairs and saw intruders coming up. "Quick! Help me barricade the door."

We moved the heavy office desk up against the door, which bought us some thinking time. I scoured the office and saw a case on the wall that held two ceremonial samurai swords. It was locked, so I prised it open with a metal letter opener. The others looked at me in horror when I practised a few moves. It had been many years since I had held a sword in my hand, but my body had not forgotten. The swords may have only been decorative items, however, in skilled hands, they were still capable weapons. To my shame, a wave of excitement swept through me…

"Master Tenjin’s thorough training had prepared me for my life now as bodyguard to Agna Sorenson, one of London’s ousted government officials. She is working covertly to undermine the stranglehold the syndicates have on London and other major cities in Britain."Ling.